The weather was perfect, and the athletes were ready to go with the 2022 US Track and Field Championships returning to Jesse Owens Stadium one year later due to the pandemic.

Area athletes have podiumed in several field events and one final with others winning to today’s finals in Columbus.

The win began in the first event as the Minster girls outperformed their neighbor to the south Fort Laurami and McColdwater competitor to win the Division III girls’ 4x800m relay in the only final of the day.

Margaret Himmelgarn-Munster stays ahead of Coldwater’s Ava Jerry during the 4x800m relay at the Class 3 State Track and Field Championships in Columbus.

“It’s 11 seconds (a personal record) for them,” Minster coach Jesse Magoto said. “That’s all we really wanted (them) because you don’t know what other people are going to do. Winning and PR, I’m very happy with that.” 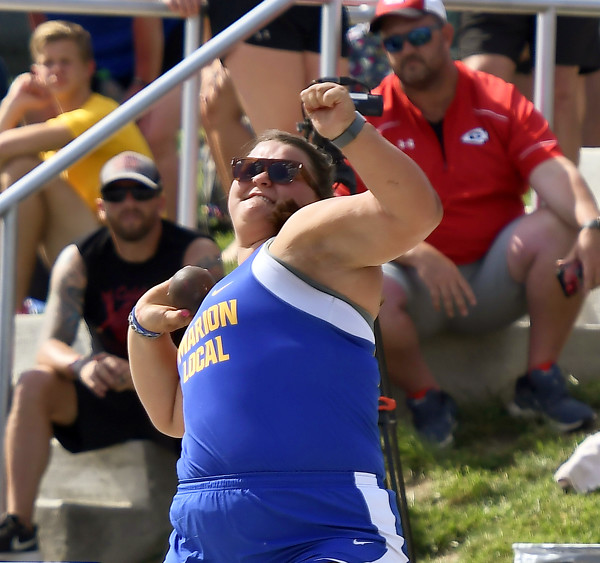 Marion Local’s Molly Weiner lifts the ball en route to winning the state title in the third division on Friday in Columbus.

The first day ended with another title for the athlete in the region as Marion Lochal’s Molly Weiner saved the best with a last shot.

Winner easily secured a spot in the last nine on her first position of the day by going 42 – 3/4. On that throw alone, she would have clinched the state title in the event, but on her last throw of the day she let a shot reach a personal best of 43 feet, winning the state title by more than one foot against her. Runner-up Kaitlin Gumm of New London, who posted her best throw of 41-2 3/4 twice in the finals. The top five runners in this event turned in their best of the day in their final attempts.

“The last shot, the best shot. That’s what we always say,” Wiener said. “I already did it once.”

Fort Recovery’s Whitley Ramill finished fourth after beating 40-11 1/4 while Lillian Barhorst of Minster was sixth as she was put on the start 39-7 3/4 during the day. 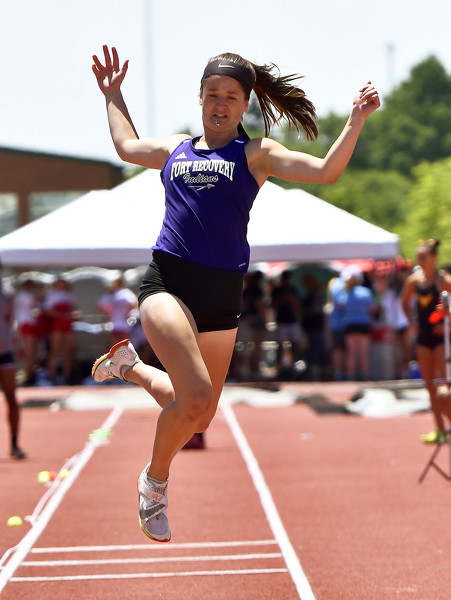 The first wave of the Field Finals resulted in several finishes on the girls’ podium as Fort Recovery’s Mara Pearson reached All-Ohio status after missing last year’s seventh place in the long jump. Pearson missed her first two attempts in the competitions before jumping 17-2 1/2 to reach the top nine advancing to the final round of three jumps. On her second jump in the finals, Pearson jumped 17-3 3/4 before faltering on her last attempt, the jump was good enough to get to the podium.

New Knoxville’s Avery Henschen concluded a successful year that included a state volleyball title and runner-up in basketball with a fourth in the hard-earned discus 129-7.

Marion Local’s Sam Holcher will have four chances to podium today as she qualified for both hurdles races and ran in the 4×200 and 4×400 relays.

Holcher finished fourth in qualifying for the 100 hurdles and later came back to take the second fastest qualifying time in the 300 hurdles. Hoelscher then teamed up with Lynn Schwieterman, Natalie Pohl and Maddie Keller to qualify fourth in 4×200. Minster finished 10th and Coldwater 17th in the playoffs as only the top nine players.

The 4×400 relay final features three MAC teams, with the Coldwater quartet of Alig, Carlee Goodwin, Izzy Zahn and Giere finishing third in the playoffs, ahead of the Minster quartet Cameo Cedarleaf, Lillian Barhorst, Keri Heckman and Roth. Hoelscher, Schwieterman, Keller and Jayden Huelsman finished seventh for the Flyers in the finals.

Fort Recovery’s Abby Francis will contend for the title after finishing seventh in the 200 dash.

Jerry was able to lead the 400 after finishing 12th in the playoffs. Goodwin was also unable to advance in the 300 hurdles.

Coldwater’s Tyler Schwetterman will get a chance to defend his title in the 300 hurdles after setting the second-fastest time in the playoffs. Schwitterman’s time of 39.64 seconds was just 0.15 seconds ahead of the fastest mark set by Bluffton’s Ethan Bogart. Minster’s Josef Slonkowski will also compete in the 300 final, having finished the race in seventh place with the fastest time.

Schwettermann is also in contention for the title in 110 hurdles, having finished seventh fastest in qualifying. Slonkowski missed out on 12th place.

The only other event a home team was able to qualify for on Friday was the Marion Local 4×100 relay team. Brayden Pavelka, Kyle Ooty, Peyton Mueller and Peyton Ooty finished sixth in the playoffs. 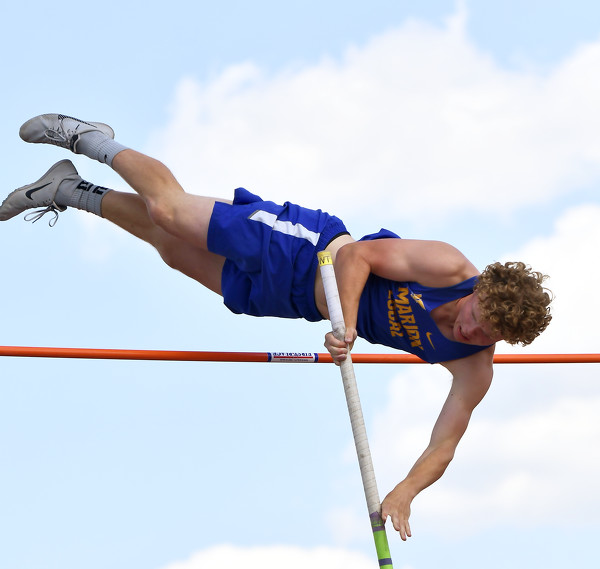 Nate Boucher of Marion Local clears the bar during a pole vault at the Division 3 Track and Field Championships.

Marion Local’s Nate Buschur earned points – and tied his own record – for the Flyers in pole vaulting in the contested final competition of the day. Boucher passed at the opening height 12-6 and then passed 13-0, 13-6, 14-0 on the first try on every try. Reaching 14-4, Boucher missed the first attempt, but was knocked out at the second, tying the school record he set earlier this season. Boucher tried three times to get past 14-8, but missed out on fifth.

Russell Head pulled out of Minster after losing three times at 13-6 to finish 11th.

His fellow Buschur’s Flyer, Jack Knapke, threw 168 feet on his first throw of the day in discus and mileage to earn him sixth place on the All-Ohio podium. Coldwater’s Jesse Meyer finished 15th after over 140 feet.

In the first wave of the field finals, Meyer used a fine throw on his last shot attempt to finish seventh with a best effort of 55 6 3/4. Henry Dustin Cointer finished 12th with a hard-earned 47-10 1/4 with teammate Brandon Keeler 46-8 to finish 14th.

Parkway’s Caden Slusher finished 15th in the long jump after scoring a best jump of 19-7 1/2 in prelims. 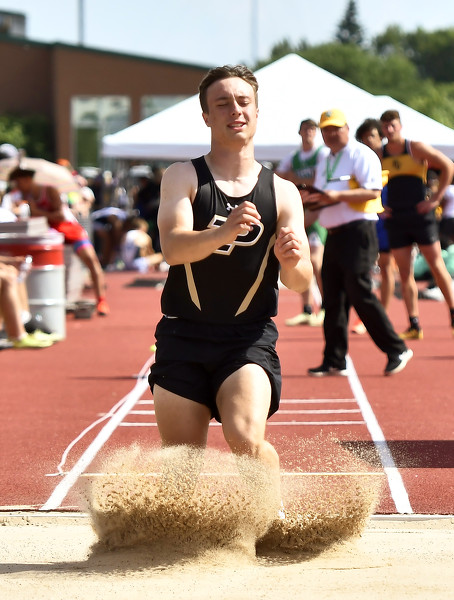 Having missed the podium at both of last year’s throwing events, Selena’s Amelia Lutz took one spot on the podium and is still throwing her second today.

Lutz saved her best last-place throw for fourth in the discus on Friday. Lutz easily made it to the finals with a powerful qualifying throw from 126-9 on her first try. After scoring 123-3 on her first throw in the finals, Lutz subtly advanced on the second, edging out 128-5, putting her third on the final throw. Lutz made no attempt, but dropped to fourth when Ottawa-Glandorf’s Emma Hoffman fired the discus with a 128-8 throw to take third by three inches.

Lutz will compete in today’s shot with teammate Neva Hauser, who is looking to put her in the pole vault. 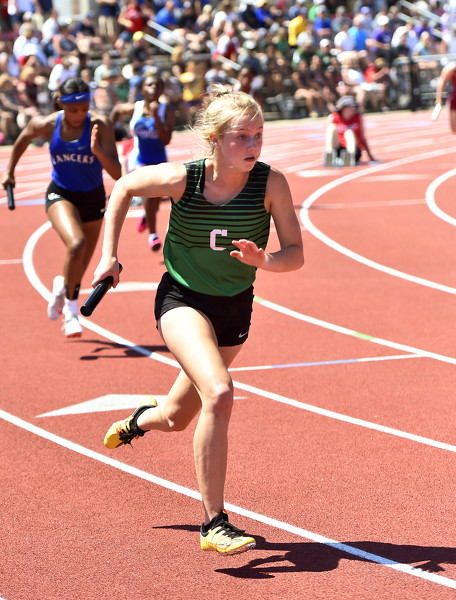 Selina’s Eli Hitchcock takes off at the start of the second-class 4x100m girls’ relay at the state meet in Columbus.

Saint Marys senior Brandon Powers will battle for the state title in 110 hurdles after finishing eighth in the qualifying. 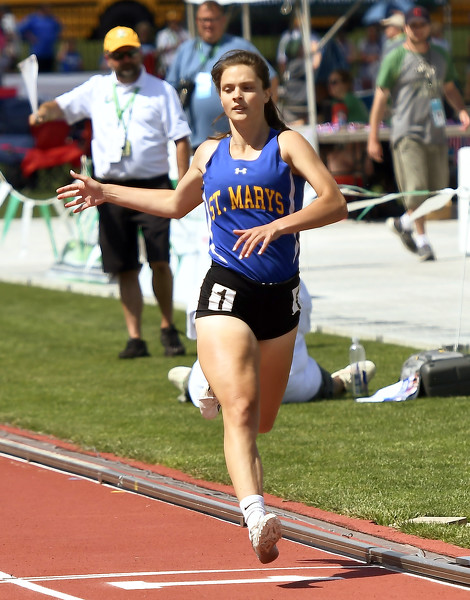 Today’s track and field schedule for the country:

~ – Being after the girls’ race