Hello travelers! This is the Genshin Impact development team, and today, we’d like to show you more about the other part of Sumeru that arrives with version 3.1 “King Deshret and the Three Magi” on September 28. This time, we’ll head west, passing through the rainforest, to enter the starkly beautiful desert. Here, we will reveal the legends of King Dashrett and the evidence of the past buried in the sand. In addition, three characters from Sumeru: Candace, Cyno and Nilou will join the cast of playable characters.

Away from the sweltering sands, the celebrations of Weinlesefest in Mondstadt arrive with the crisp autumn wind blowing, along with more events, mini-games, and rich rewards.

In contrast to the green rainforest, the Sumero Desert looks bleak and barren at first glance. In the middle of the desert lies the huge tomb of King Dashrett. Although King Decheret and his ancient civilization perished, his legends and techniques are still told by the people of the desert as well as the mechanisms and robots guarding his resting place. 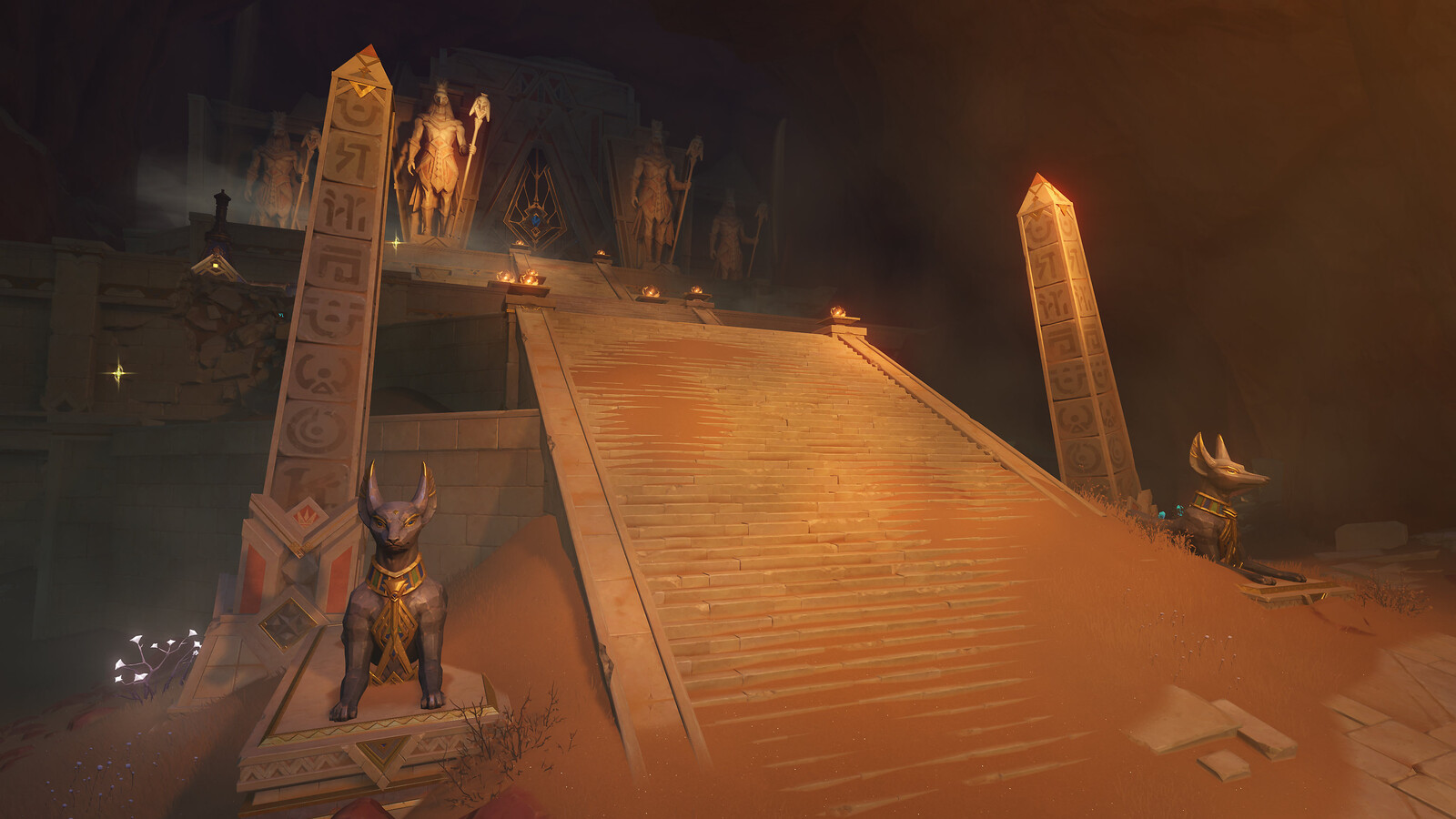 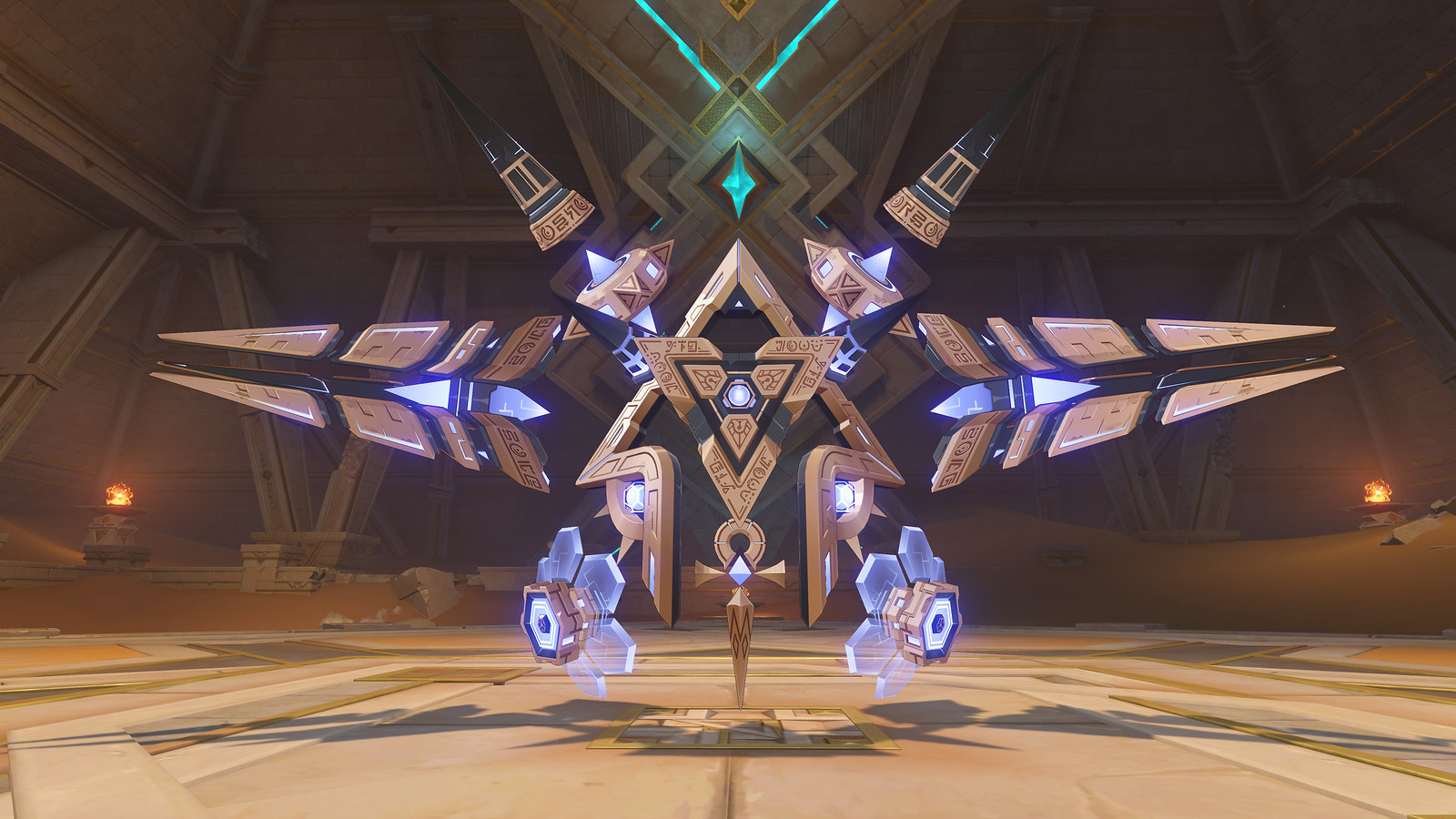 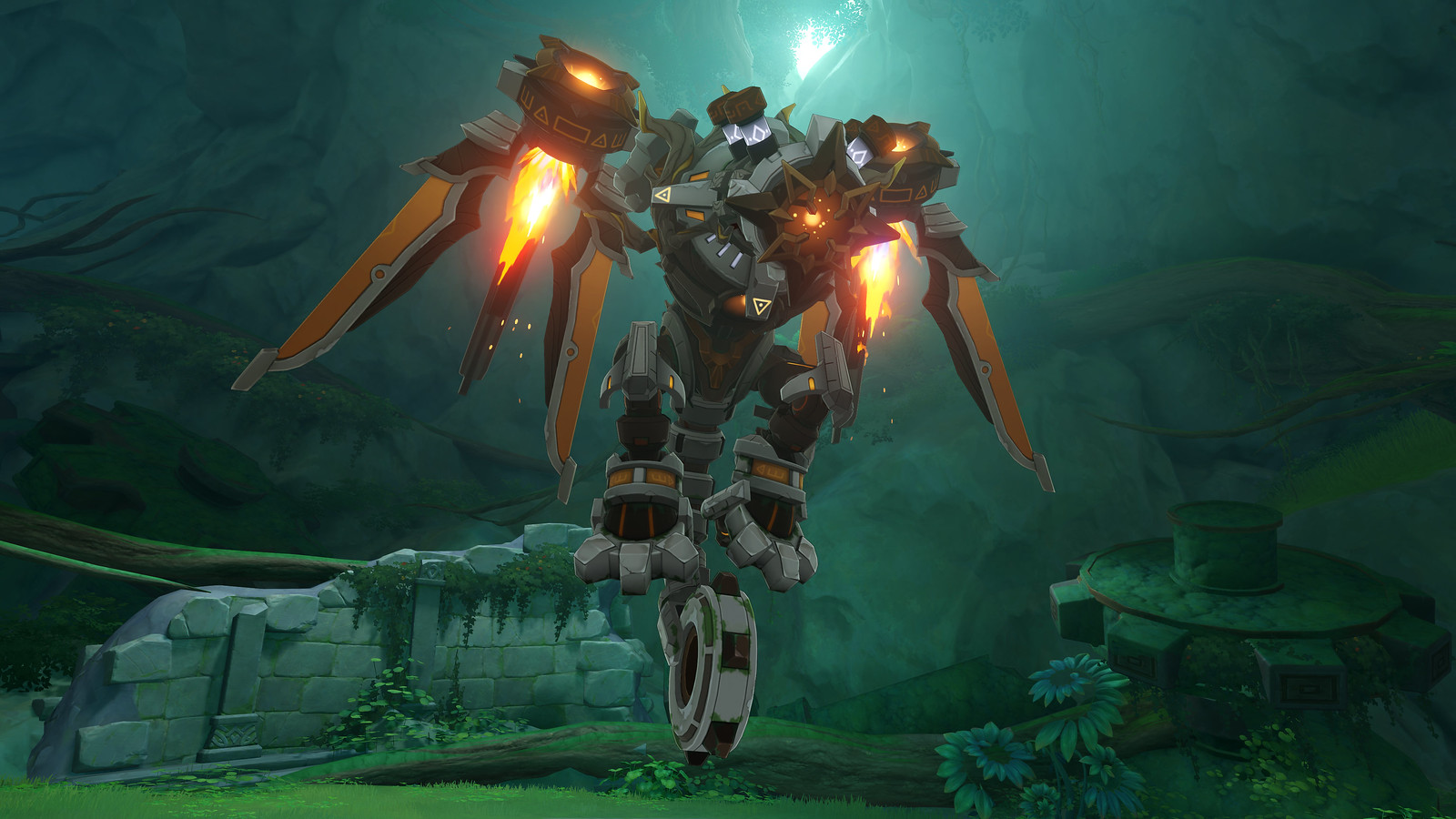 Beneath the blazing sands are a large number of dungeons, challenging intruders with invisible puzzles, mechanics and robot guardians backed by the ancient technologies of King Dashrett. The Supervisor Network’s semi-transient matrix algorithm is the most dangerous of all algorithms, with the ability to become invisible during combat. Another new boss enemy, Aeonblight Drake is also a powerful mechanical monster that can be found in the rainforest.

The desert region is not lifeless and desolate as it first appeared, yet it reveals an astonishing diversity of terrain and organisms. Huge dunes, canyons, and oases stand amid harsh arid conditions, and creatures like Sumpter Beast, Desert Fox, Quicksand Unagi, Red Vulture, Scorpion, and Scarab all call this area home. Meanwhile, the village of Aru is the largest settlement and solid fortress of the desert people. The village also received many exiled scholars from the academy, and became a meeting place for people from different walks of life and valuable intelligence. 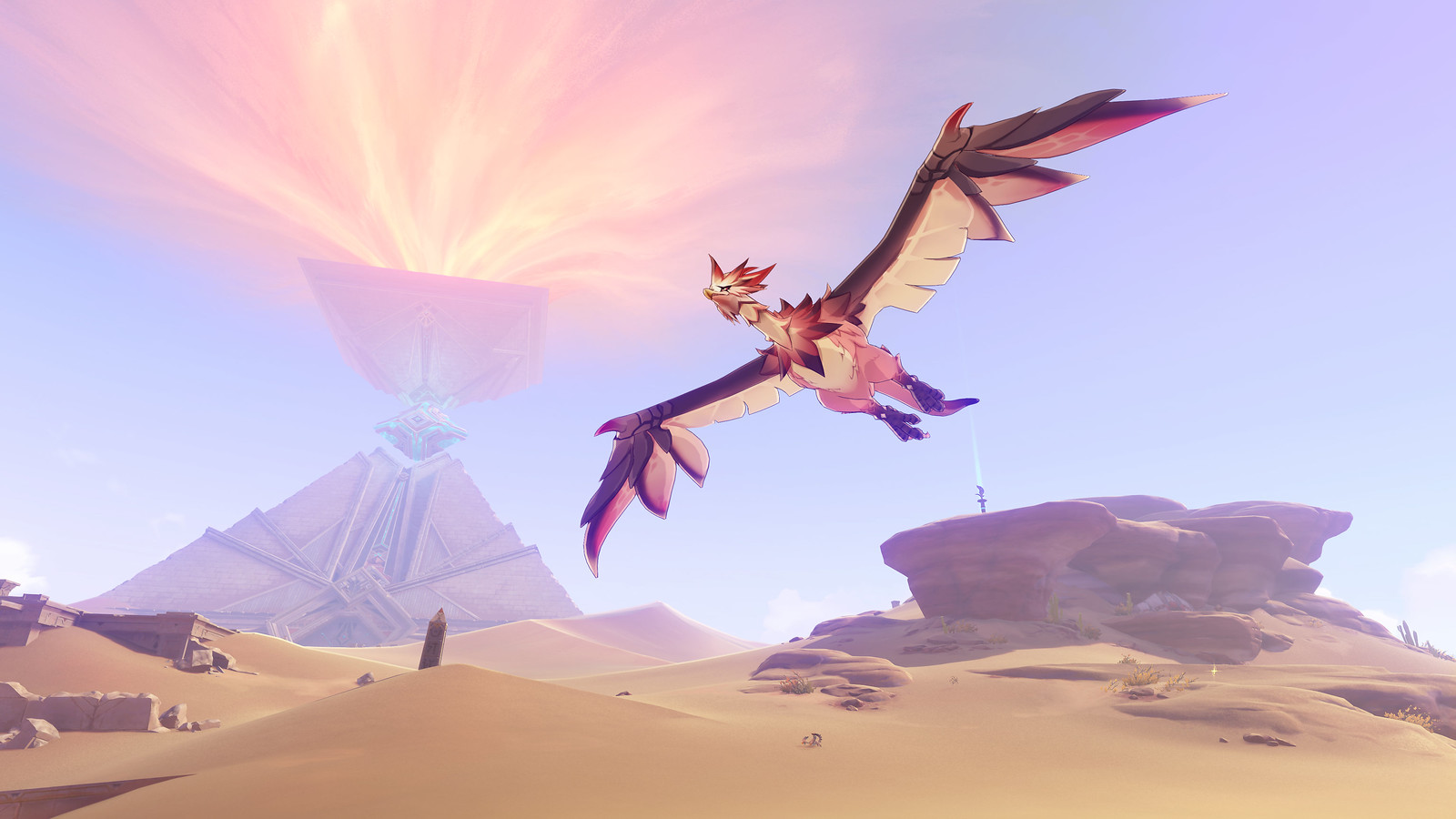 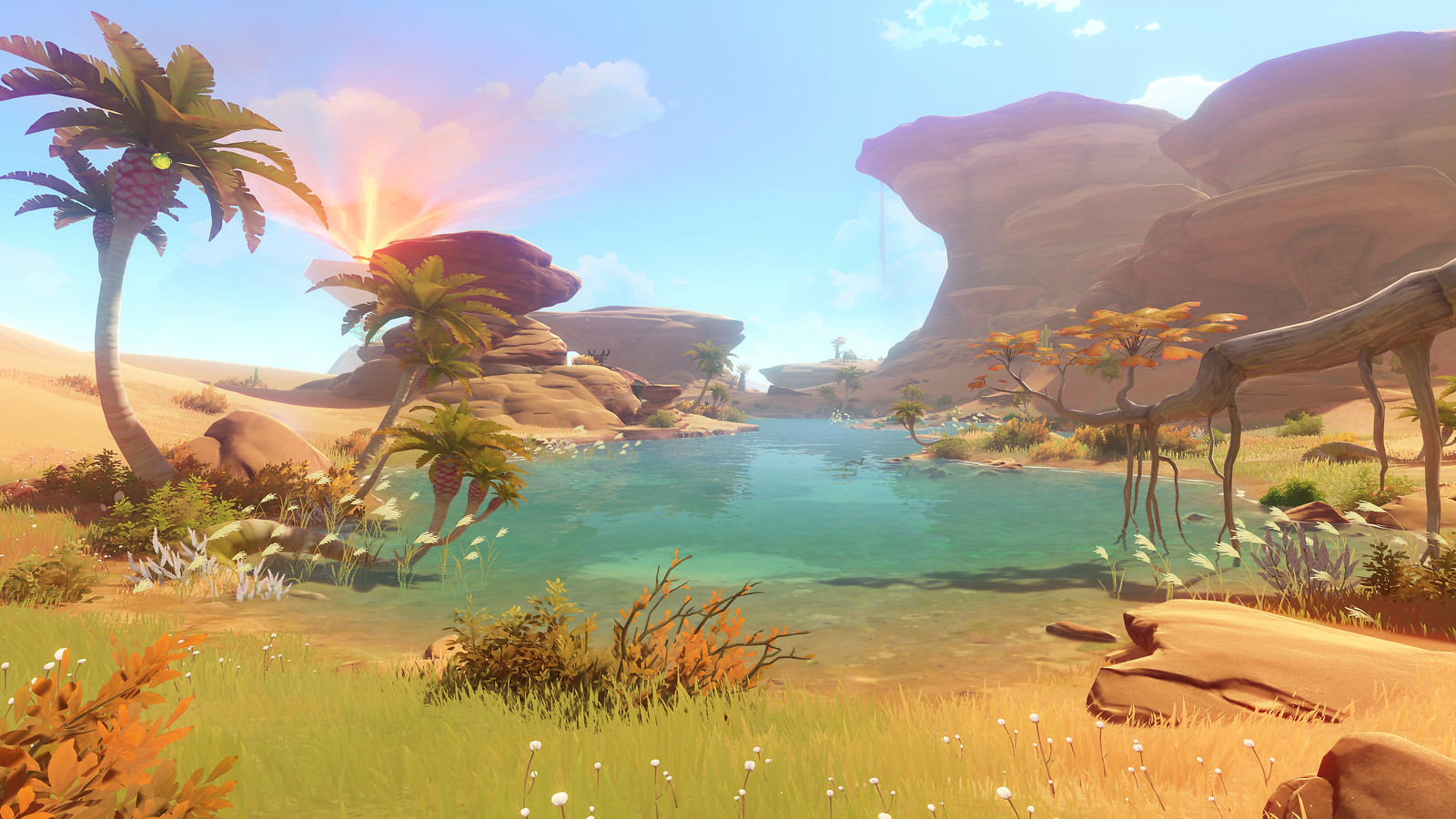 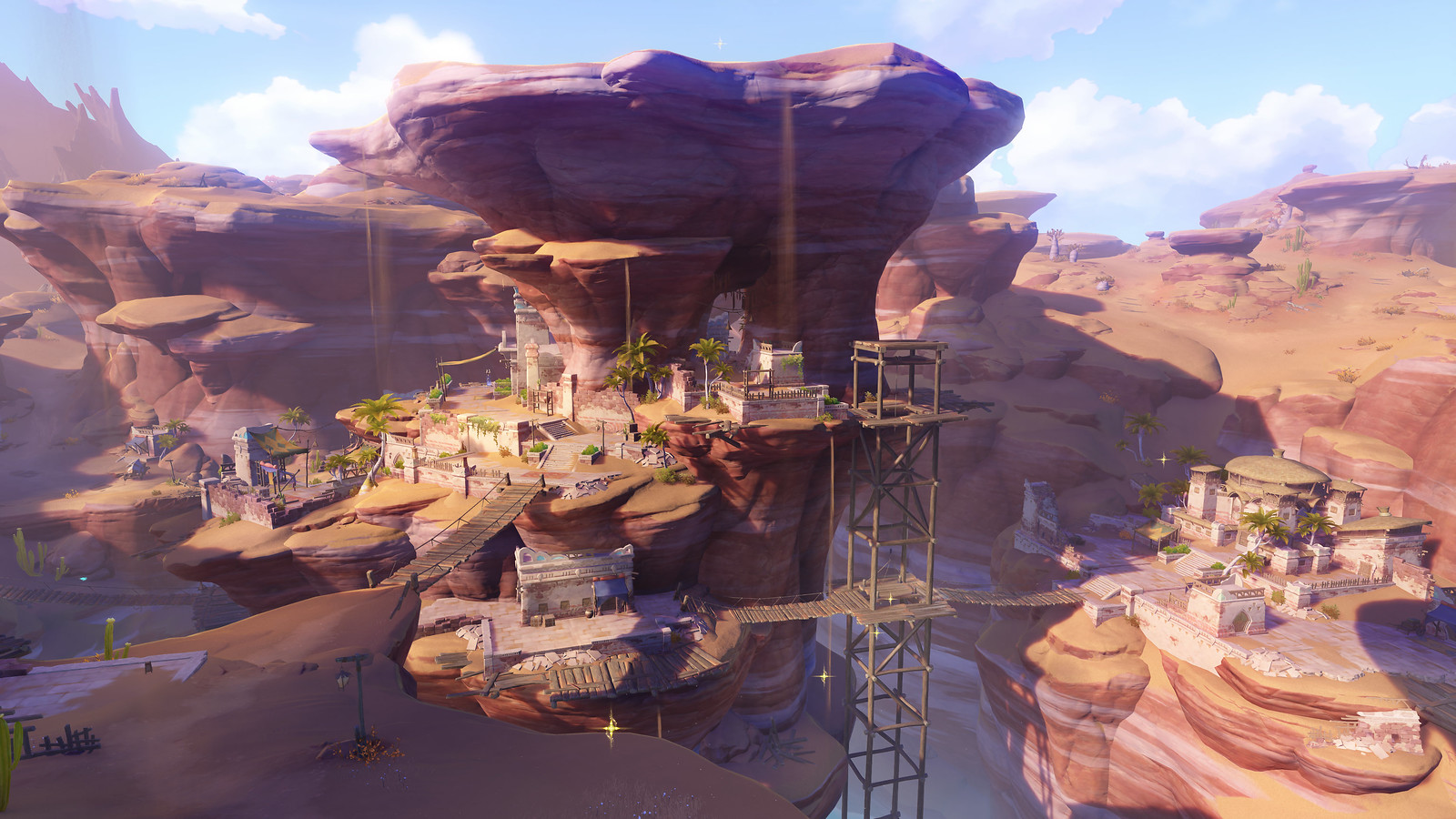 The Archon Quest mission will continue in Sumeru as the landscape extends into the desert. While the traveler is busy dealing with the academy, two Fatoye Harbinger, El Dotor and Scaramush, have been plotting a scheme in the Nation of Wisdom.

As the story progresses, more Sumeru characters are willing to become reliable allies. A descendant of King Dashrit, Candace guards the village of Aru with her shield, flag, and water vision. Although Candice is kind and friendly with people, she will turn into a fierce and skilled fighter whenever she feels threats to the village. Candice holds her base skill, and she will begin to charge her skill and raise her shield to fend off incoming attacks and absorb the destruction. When Candace is fully charged, she can jump high and unleash a fierce blow to the enemies in front of her. In Exploration, Candace can reduce the consumption of climber stamina for all four party members. 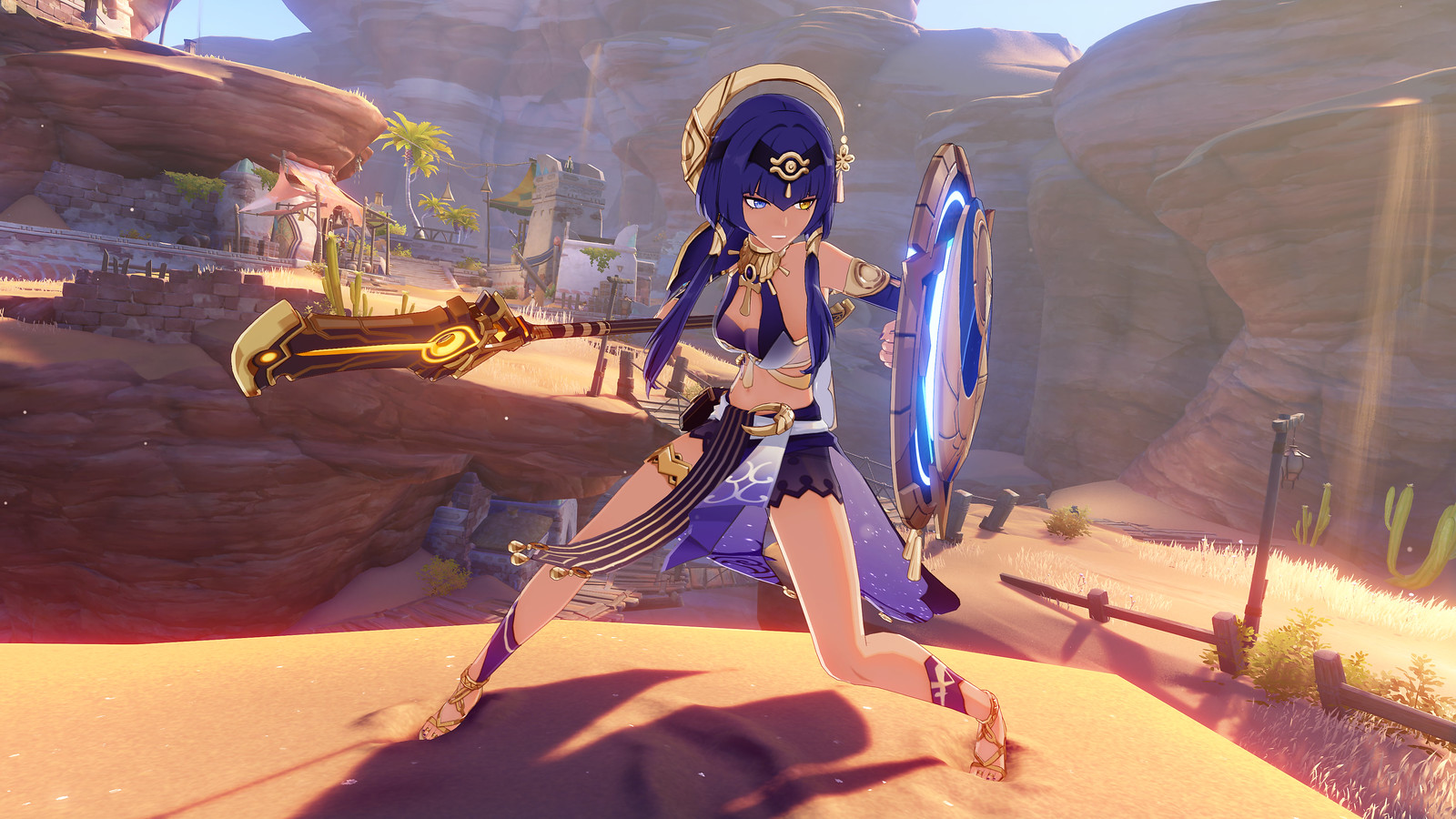 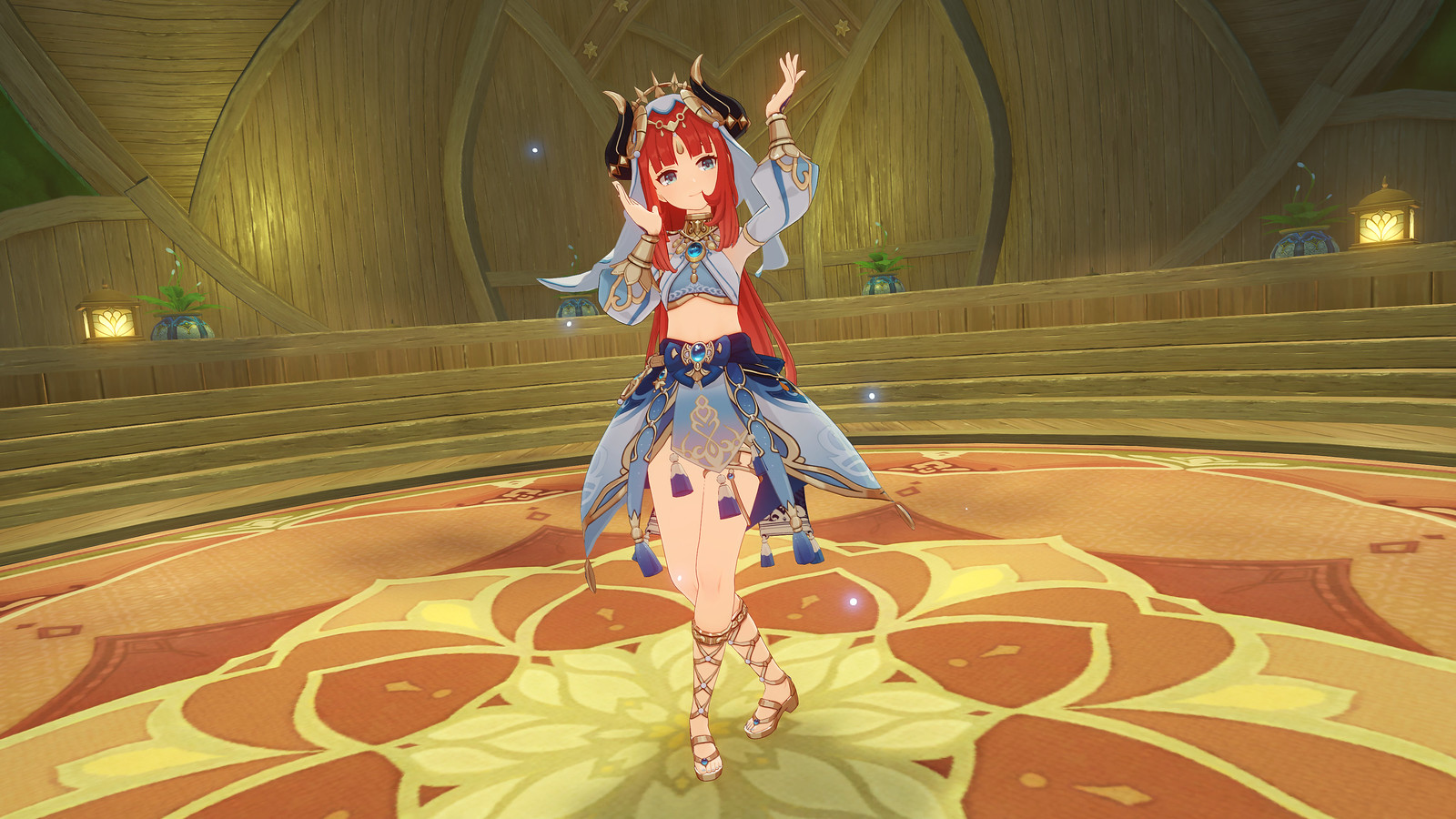 Just like her dance, Nilou’s presence also has a calming effect in Sumeru, as her caring personality always pushes her to support the people around her. However, she can also use some help when confusion and negativity arise in her mind. In combat, Nilou prefers the sword and Hydro’s strength, and her elegant dance techniques are also evident in her attack patterns. With her Elemental Skill, Nilou can perform two different dance moves, Sword Dance and Whirling Step, which deal different effects and different damage respectively. She can improve her teammates if Dendro and Hydro are the only two items available on her team. 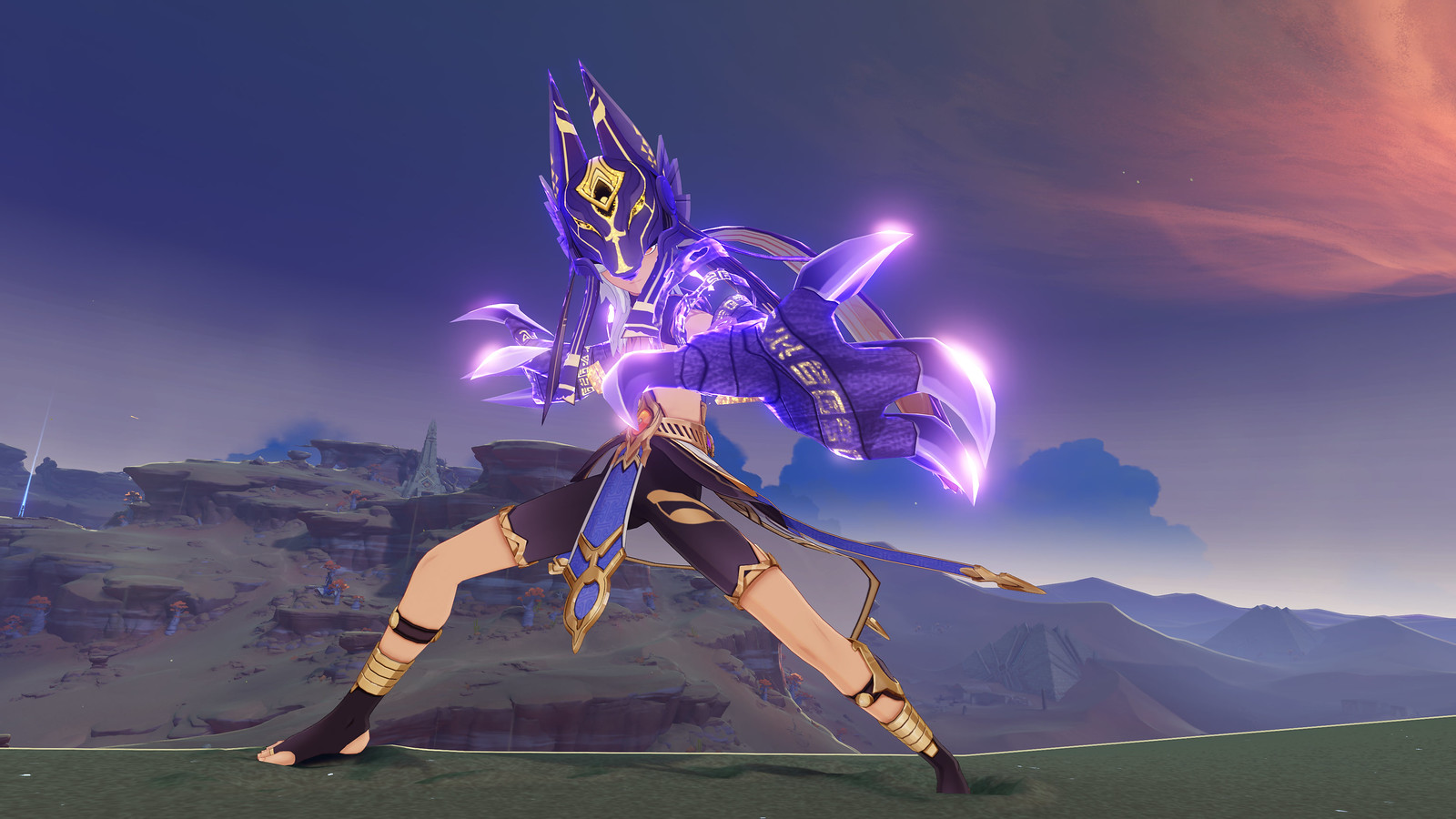 As General Mahamatra, Cyno is quite accustomed to fighting with his weapon and the power of Electro. With his Elemental Burst exploding, Cyno invites the Divine Spirit to live in him, and transforms into the Pactsworn Pathclearer. In the case of the Pactsworn Pathclearer, Cyno Normal, Charged, and Plunging attacks will be converted to unsurpassable electrical damage. At the same time, Cyno will get many improvements including increased item proficiency, drop resistance, and immunity to electrostatic damage. In everyday life, Cyno carries out his duties to uphold justice and the rules of the Academy conscientiously, but he also holds a firm conviction and prudent attitude towards scholars and knowledge. After work, Cyno often pursues some interesting hobbies, including telling not-so-funny jokes and Genius Invokation, a brand-new trading card game due to be added in version 3.3!

Cyno and Candace will be available during Event Wishes in the first half of version 3.1, coinciding with the reboot of Venti. Nilou and Albedo’s replays will follow in the latter half of the update.

To better simulate realistic tracks on sand, we have implemented a new feature, Dynamic Terrain Deformation. When characters and creatures step on the desert, sand will sink under their feet, while part of the sand will collect around the footprints, causing a slight bump. Quicksand effects vary depending on the sizes and movements of different targets.

Meanwhile, we have also enriched DualSense Controller support for version 3.1. Each playable character will get vibration feedback as they throw an Elemental Burst, and we have another surprise for you to discover!

Need a break from the hot, dry climate? People in Mondstadt prepare for the annual Weinlesefest competition. In folklore, this is the time to brew and taste the wine of the year with the Anemo Archon. If Archon is satisfied with the new wine, he will send his blessing with the autumn breeze. 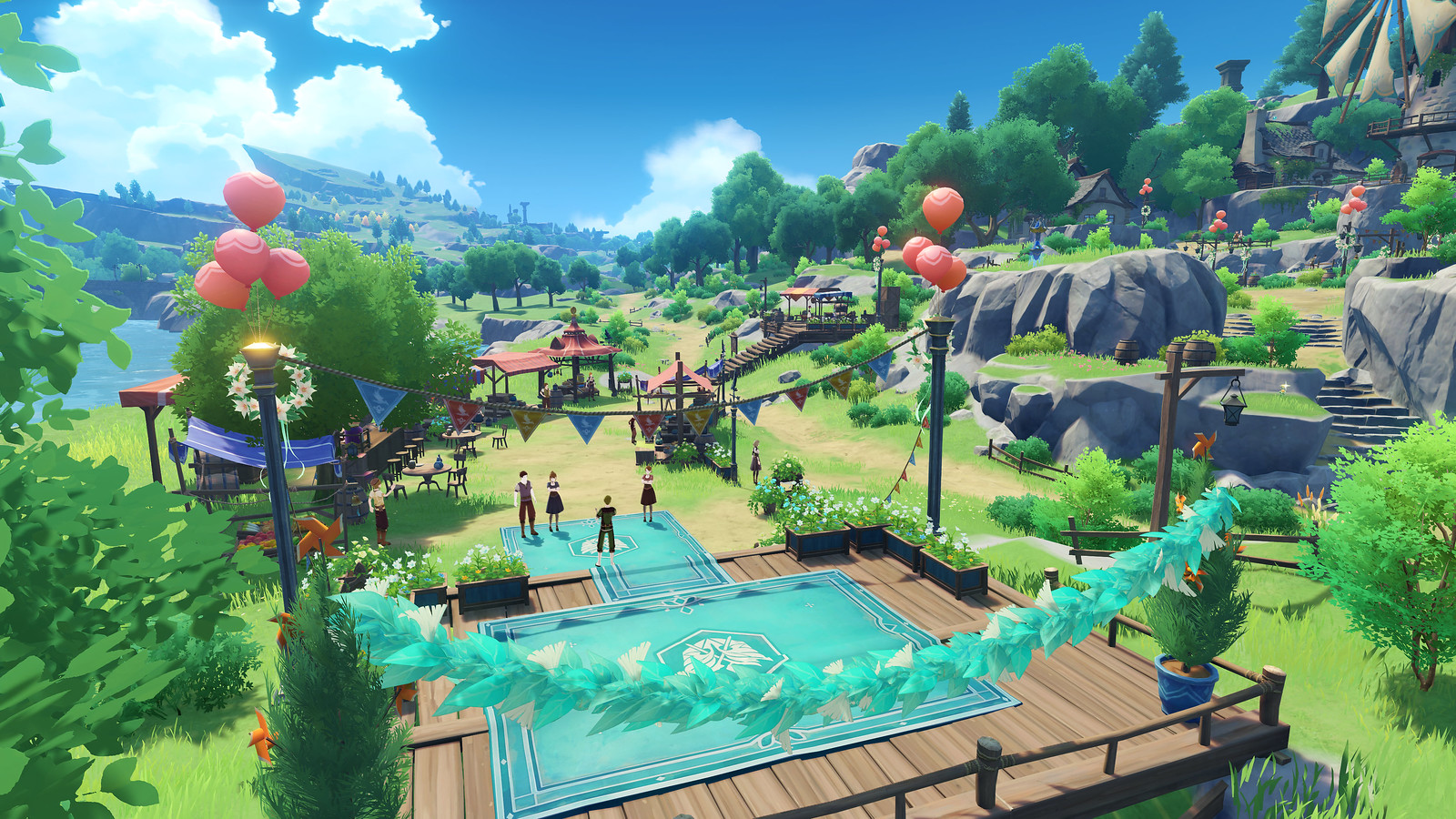 This year’s Weinlesefest is all about family and friendship with our old friends. However, the main story will shed light on Razor, as well as his past will be revealed as the story unfolds. Besides, festivals often come with challenges and mini-games. We’ve prepared four different games during the seasonal event, such as the unique Charity and Creativity, which requires players to manage your own stores! By trying all four games, you can get a Festive Fever and exchange for various rewards including a new four-star weapon, Missive Windspear, and exclusive refinement items.

In addition to the festival, a new event “Wind Chaser” will challenge your tactics and the way you maneuver with the currents of the winds in a private field. Another event, “Star-Seeker’s Sojourn” will require your help in fulfilling a young girl’s wish to search for future stars. Furthermore, if you manage to clear Floor 4, Room 3 in Spiral Abyss, you will have the chance to recruit Collei for free!

Last but not least, we bring more rewards during version 3.1. The Daily Login event is back again, with up to 10 interlocking destinies and other items to be claimed. Also, please remember to check your in-game mailbox for total Primogems x 1600, Fragile Resin x 4, and two unique gadgets, Jumpy Dumpty Party Popper and Cloud Retainer Damasked Device. We hope you had a great time with version 3.1, and we look forward to seeing you next time!